Origins of a Concept

I originally had the idea for Real Bubble back in 2010. I had bought a cheap bubble-wand for my then 5-year-old nephew, but had yet to give it to him when I found myself bored at home one day. At the time, I had only just discovered photography and was well and truly in the honeymoon phase of my new hobby/profession. So I was always on the lookout for new subjects to photograph, and when I blew the first bubble - with the admittedly mature intention of seeing exactly how big the bubbles could get - I was immediately captivated by the colours.

Photography was forcing me to look at everything in a new way. What would make for an interesting subject? From what angle? In which light? Etc. So its not surprising to me now that reaching for my camera was the obvious next step to try and capture those colours. 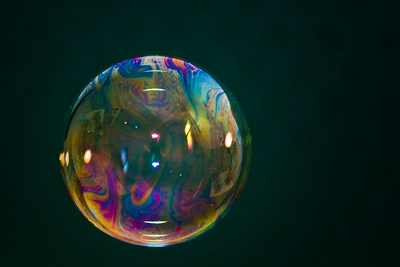 And that’s what I did, firing off a few shots right there in my living room before checking my results. What surprised me at first was how quickly the colours of a single bubble had changed, and that one bubble could look so different just seconds apart. But once I got my pictures onto my larger computer screen, something else surprised me even more. I realized for the first time that I had a reflection of the room around me in the bubble. I distinctly remember stopping in my tracks. It wasn’t a perfect reflection. It was out-of-focus, refracted and distorted, but still completely recognizable as the room around me. A few more attempts with a few more bubbles corrected the first issue, but I soon realized that the distortion and refraction actually made the resulting image that much more intriguing. 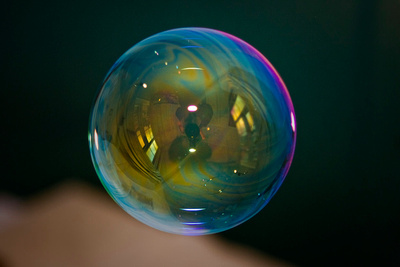 My First Clear(ish) Reflection in a Bubble!

From there, it was but a small step to heading out to the city centre, to see what results I’d achieve capturing reflections in bubbles. I went to the bottom of market street, outside the Royal Exchange, by the old Manchester Wheel, outside Victoria Station, and I even spent 4 hours outside Old Trafford being gawked at by bemused tourists as I chased after bubbles that seemed so desperate to elude me.

The results pleased me, but not enough. I felt the equipment I was using at the time was limited, as was my photography and editing knowledge. The idea was strong, but my skills were as yet underdeveloped. And I knew it showed in the final images, close though they were getting to the finished article.

It was around this time that my girlfriend learned she was preganant, and my bubbles got put on the metaphorical shelf as I focused on earning a living for my growing family, and building my skill base. The idea never left me, but it wasn't until 6 or 7 years later that I realised I was finally in a position skill and equipment-wise to make something of it, and the rest, as they say, is history.

Early on when touting my concept and showing my initial test images around some 8 years ago, it was suggested that, in order to create a ‘cleaner’ image, I should actually take two photographs - one of a bubble, another of whichever scene I wanted to capture – and just combine the two in Photoshop. And I’m prepared to believe that such a process may produce a ‘cleaner’ image. But my issue with that is quite straight-forward.....I’m a realist through and through. Amazing worlds, entire spectacular universes can be created in Photoshop from scratch, and they can look mind-blowingly beautiful. But the problem is, they’re not real. They don't, and never did, exist. They’re constructs of someone’s imagination and skill - often impressively so - but they’re not based in the real world.

My bubbles are. Anyone can find some bubble solution, blow some bubbles, and witness for themselves the beautiful, hypnotic, ever-changing images they present back to us in their reflective surfaces. And as with so much beauty in our world, the bubbles' fate is sealed and they're destined for tragedy, with their particular brand of beauty lasting mere seconds before bursting into non-existence.